I’m breaking the festive vibe of the past few posts to bring you the latest amazing news from our favourite brand, Dior!

Centered on a reinvented in a futuristic and street-wear style BAR Jacket,  designer Raf Simons’ latest collection, ESPRIT DIOR TOKYO 2015 Fashion Show was inspired by the beautiful city of Tokyo and the way people here think their liberty and think their freedom to express themselves through high-fashion, right there on the streets. All that to create a new Dior Femme very, very strong and emancipated.

It was Peter Philips‘ job to translate all these concepts into a makeup look. The final look was a minimal makeup, with graphic elements inspired from the Japanese culture Manga mixed with the more traditional elements of the graphic Kabuki makeup, focused on the eyes.

The main attraction of the eye look is this graphic black square drawn on the upper lid with a new product yet to be released next year: the DIORSHOW PRO LINER. The new eyeliner is based on the concept of calligraphy, it has a specific shape and form, which makes the drawing of fine, precise lines easier. ( With such promise, that little one HAS to be mine!!! ). Note the Mathematical symmetry of the look, which continues on the lower lid with the same drawing!

You might be happy to find out that mascara was used this time and the one Peter Philips prefered this time is an old favourite of mine, the DIORSHOW Mascara, but only a few feathery strokes of that because it goes on very black easily. I can confirm!

The eye look was finished with some jumbo glitters placed strategically at the base of the lashes, in the middle of the graphic drawing, to act like a little flash of light every time the models blink. These are also elements we find in the actual clothes.

To create the perfect neutral complexion Peter Philips used this new(?) DIOR DIORSKIN AIR NUDE HEALTHY GLOW ULTRA-FLUID Foundation for a fresh, not powdery at all look. Don’t they remind you of the Armani Maestro Fusion?

For blush he used these two peachy and pink Dior blushes also to accentuate the fresh radiance of the complexion. Same goes for the lips on which he used this year’s release DIOR LIP BALM TREATMENT Lipsticks ( previously announced here ).

A great makeup look, for an amazing collection! Just the way Dior had us used with!

What are your favourite elements of this look beautiful?

The photographic material used in this post is courtesy of Dior.

Here you have more photos from the ESPRIT DIOR TOKYO 2015 Fashion Show. 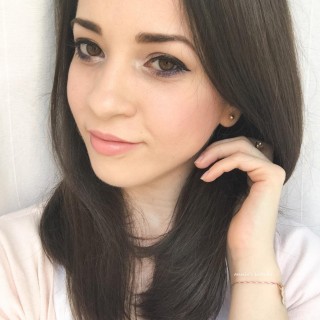